"KIM IL SUNG and WFTU" (3) The Sky Is Blue Forever

The Sky Is Blue Forever
(Written by Alexander Zharikov,
General Secretary of WFTU)

The sky is blue and the sun shines forever.
The world progressive people wished the great President Kim Il Sung to remain their sun shining the future. This wish was materialized with the preservation of the President in state in the Kumsusan Memorial Palace by his loyal heir, Comrade Kim Jong Il.
With the sun rising the setting, I expressed my deep thanks again and again to Comrade Kim Jong Il for his devotion to the President's orbit.
The revolutionary cause should have traditional continuity. When the leader's heir is great, the continuity of the tradition will be great, too.
Comrade Kim Jong Il has inherited and developed the President's ideas and exploits perfectly, and follows the President's teaching the same way.
Everyone in Korea praises his idea, leadership and morality to be as high as the President's.
I visited Korea for the third time in July of 1995 to show respect to the President and Comrade Kim Jong Il.
At that time I felt in my heart and Comrade Kim Jong Il is really a great man in the world with extraordinary political leadership and high virtue.
Entering the Kumsusan Memorial Palace, I thought I was coming into the world in a fairy tale.
The Palace is a house of endless loyalty and lofty morality that you can't find anywhere else. It is one of the best presents of Comrade Kim Jong Il to the people who wished the President a permanent life.
I saw the President lying in state and paid a moment's silence, saying to myself "Here is the General Secretary of the WFTU to see Your Excellency President."
Out of the service hall I wrote my impression on a book: "It has been a year since the great leader Comrade Kim Il Sung left us. The President, the founder of the Democratic People's Republic of Korea, the fighter for freedom and independence and the distinguished man in the international labour movement, devoted his life to the people's liberty and independence. Therefore, the great leader Comrade Kim Il Sung is alive in the hearts of the Korean working people as well as the entire workers of the world. I wish President Kim Il Sung, a great man who devoted everything to the struggle for peace, liberty and sovereignty, a permanent life."
During my third visit to Korea I was surprised to see the Korean people rising up from deep sadness and hardships. I had heard Korea was on the "Arduous March" due to the isolating and stifling attempts of the allied imperialist forces. There was an extreme shortage of food and other things. Everyone starved and fastened their waist belts.
Rumors of the possible collapse of Korean socialism spread worldwide through Western propaganda. It was the worst situation, and I am sure any other nation can't survive this kind of hardships.
However, the Korean working people were full of not of frustration and pessimism but of confidence and optimism.
It was the Korea's character that the more difficult the conditions were, the more firmly they were united through thick and thin. And this character, Koreas say, is reflected in the red flags that wave more vigorously in the stronger wind.
I think, and I am sure, that the world progressive people are fortunate to have another sun in the era of independence, Comrade Kim Jong Il, the greatest of the great generals.
I hope to meet him at the soonest possible time, and I am confident that the day will come soon.
The great President Kim Il Sung will always be together with the workers of the world.
Publicat de http://asociatiaromaniamuncitoare.blogspot.com/ la 00:18 Niciun comentariu: 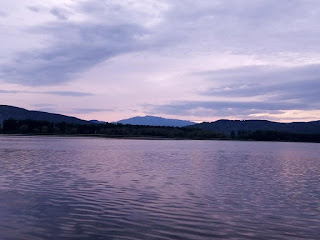