Dear Mr. President Recep Tayip Erdogan, I urge you to ensure that the charges against Chair of Amnesty International Turkey, Taner Kiliç, are dropped and he is immediately released.

To His Excellency Mr. Recep Tayip Erdogan
President of the Republic of Turkey


I urge you to ensure that the charges against Chair of Amnesty International Turkey, Taner Kiliç, are dropped and he is immediately released. 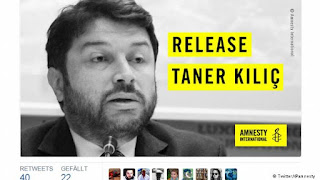 Taner Kiliç was detained on 6 June along with 22 other lawyers. He is wrongly accused of membership of the “Fethullah Gülen Terror Organization”. Taner Kiliç is not a criminal or a terrorist; he is a longstanding defender of human rights in Turkey and must be released.

I am also appalled to hear about the detention of the second Amnesty International Turkey leader within the space of a month.

Just a few days ago, Turkish police arrested Idil Eser along with 7 other human rights defenders and 2 trainers, who were simply attending a workshop in Istanbul.

For more than 24 hours, they weren’t allowed to contact their families or see a lawyer - and no one even knew where they were. They were doing nothing wrong. Some are being questioned on suspicion of “membership of an armed terrorist organisation”, a baseless and ridiculous accusation.

It has not escaped the world’s notice that this kind of attack on Human Rights Defenders is becoming more frequent in Turkey. You must immediately and unconditionally release all ten detainees.

I also urge you to ensure that all journalists and other media workers held in pre-trial detention since the 15 July violent coup attempt, some for over six months, are released without delay.

Whilst it is indeed the right and duty of the government to investigate last summer’s coup attempt and to combat terrorism, it is also the responsibility of the authorities to ensure fundamental human rights are not violated in the process and the right to freedom of expression is respected.

The lengthy imprisonment of more than 120 journalists, executives and others in the media pending trial since July 2016 is arbitrary and punitive. This shocking number makes Turkey the biggest jailer of journalists in the world. I am worried that many of those detained may be facing unfounded terrorism charges aimed at harassing and intimidating journalists exercising their right to freedom of expression.

I call on you to use all your powers to uphold the fundamental principles of freedom of expression, fair trial, and to ensure that no prisoners are held in inhuman or degrading conditions.